Small, foldable, super fast, and capable of good and stable video footage. Those were the design requirements for Foldy 2.0 FPV Drone.

I wanted to create a small, elegant, foldable mini quad, something that can be easily thrown into a bag. I also wanted it to be fast, capable of flying with a GoPro in it’s case, and capable of using 6 inch props. While researching designs I decided that I want to stay away from the H-Quad design because it’s aerodynamically inefficient and limits the foldability of the quad.

I designed the frame in AutoCAD to be cut out by a CNC machine from 1.5 mm and 3 mm sheets of solid carbon fiber. I used the thicker 3 mm CF for the arms, and the thiner 1.5 mm CF for the rest of the frame. To save weight, all hardware on the quad is eit

her aluminum or plastic. The 4 extra thick plastic screws are also designed to break apart during crash. The screws are much cheaper to replace, compared to the expensive CF arms and electronics inside the frame.

To minimize the thrust differential necessary to yaw, pitch, and roll the quad all of the electronics and the battery are positioned as close as possible to the center of the quad. Though it looks bulky in profile, compared to traditional H-Quads, the Foldy quad is a lot more aerodynamic in fast forward flight.

You have to remember, in fast forward flight the drones are tilted by 55+ degrees. In that position, a traditional H-Quad creates a reverse airfoil around it’s main body, causing negative lift. On the other hand, Foldy Quad has roughly the same aerodynamic profile regardless of it’s orientation and direction of flight. 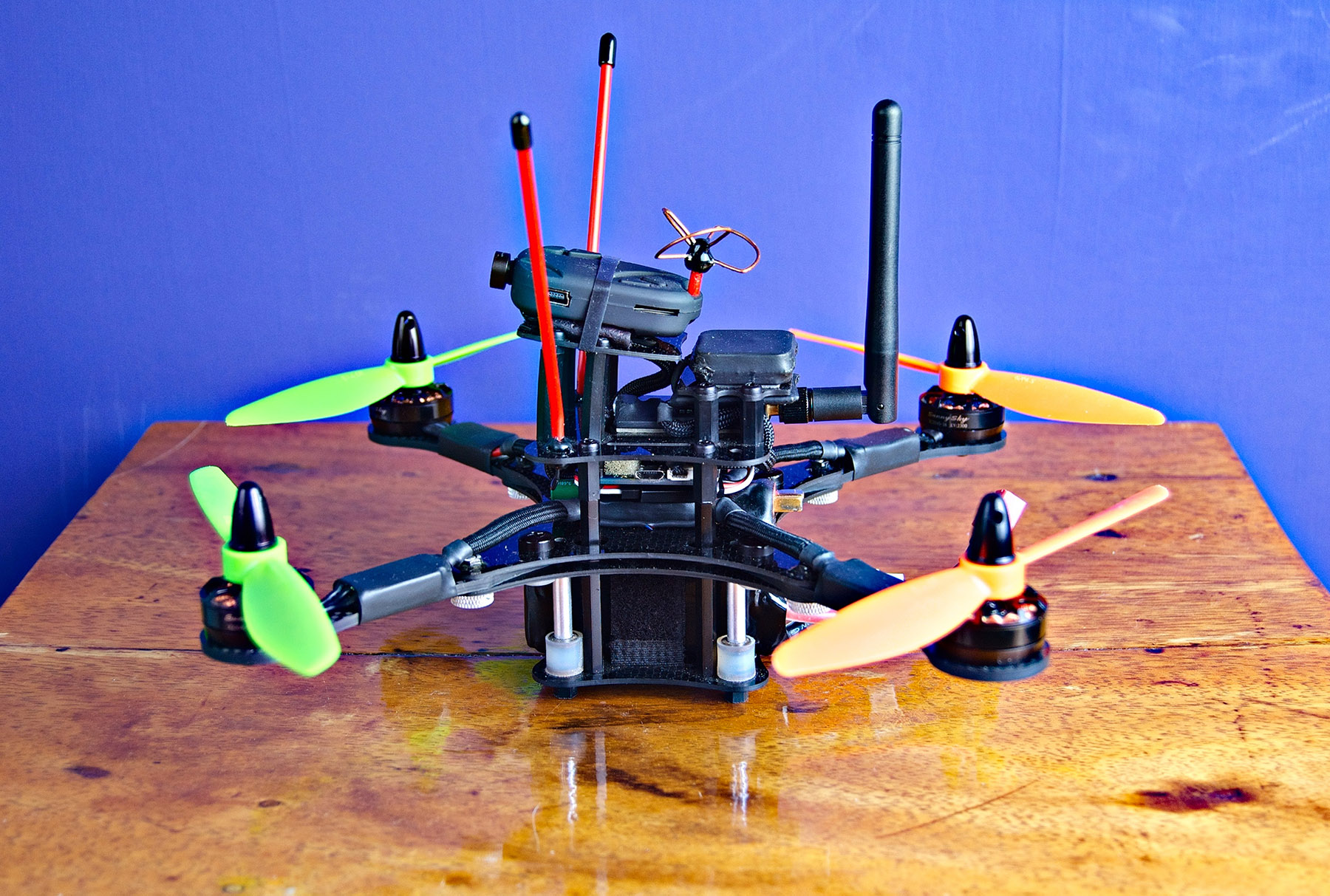 Update: It’s been pointed out that I have made some bold claims in the above paragraph without backing them up with some pictures demonstrating what I was talking about 🙂 Below I added a picture of Foldy Quad and one of my H Quads. They are both roughly the same size, motor to motor, and have similar amount of space for electronics and battery. The picture was taken at a 45 degree angle to demonstrate the surface area of the quad exposed to the wind in fast forward flight.

At greater speeds, with more pitch, the Foldy Quad would have even more advantage. Recently many manufacturers started to make frames with tilt motors, to address just this problem. But I personally think that Foldy Quad has a more elegant solution, but of course, I could be biased 🙂

For ease of transport and to decrease the likelihood of damaging the arms during a crash the arms fold away around the quad. The arms fold in a circle to minimize the size of the folded quad.

Originally, I planned to secure the arms with neodymium magnets in the open position. However, after some testing, it turned out that even the strongest neodymium magnets I could find could not withstand the vibration and forces applied to the arms during aggressive flying.

I ended up using plastic screws instead. The plastic screws are tough enough to withstand hard loads during acrobatic flight, but will shear on impact, dissipating some of the energy of the impact. 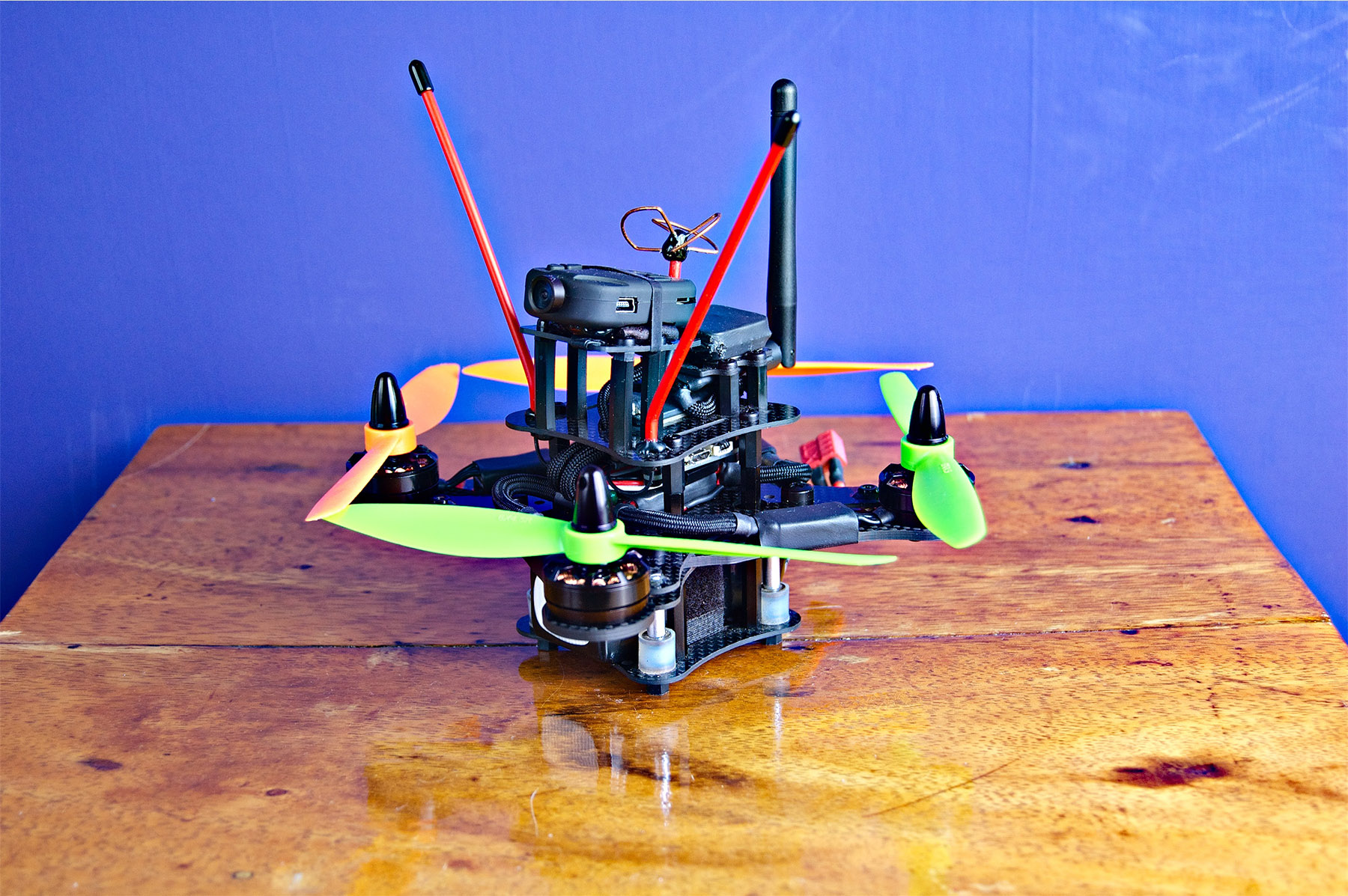 Below you can see how the main body cage stays in place as the quad’s arms move side to side and up and down.

Because this is an FPV quad, I would be remiss if I didn’t talk about the FPV backpack I created for it. It’s really just an 808 #16 camera with D lens hardwired to TX5200M 5.8GHz 200mW 5V transmitter module and custom made circularly polarized antenna. 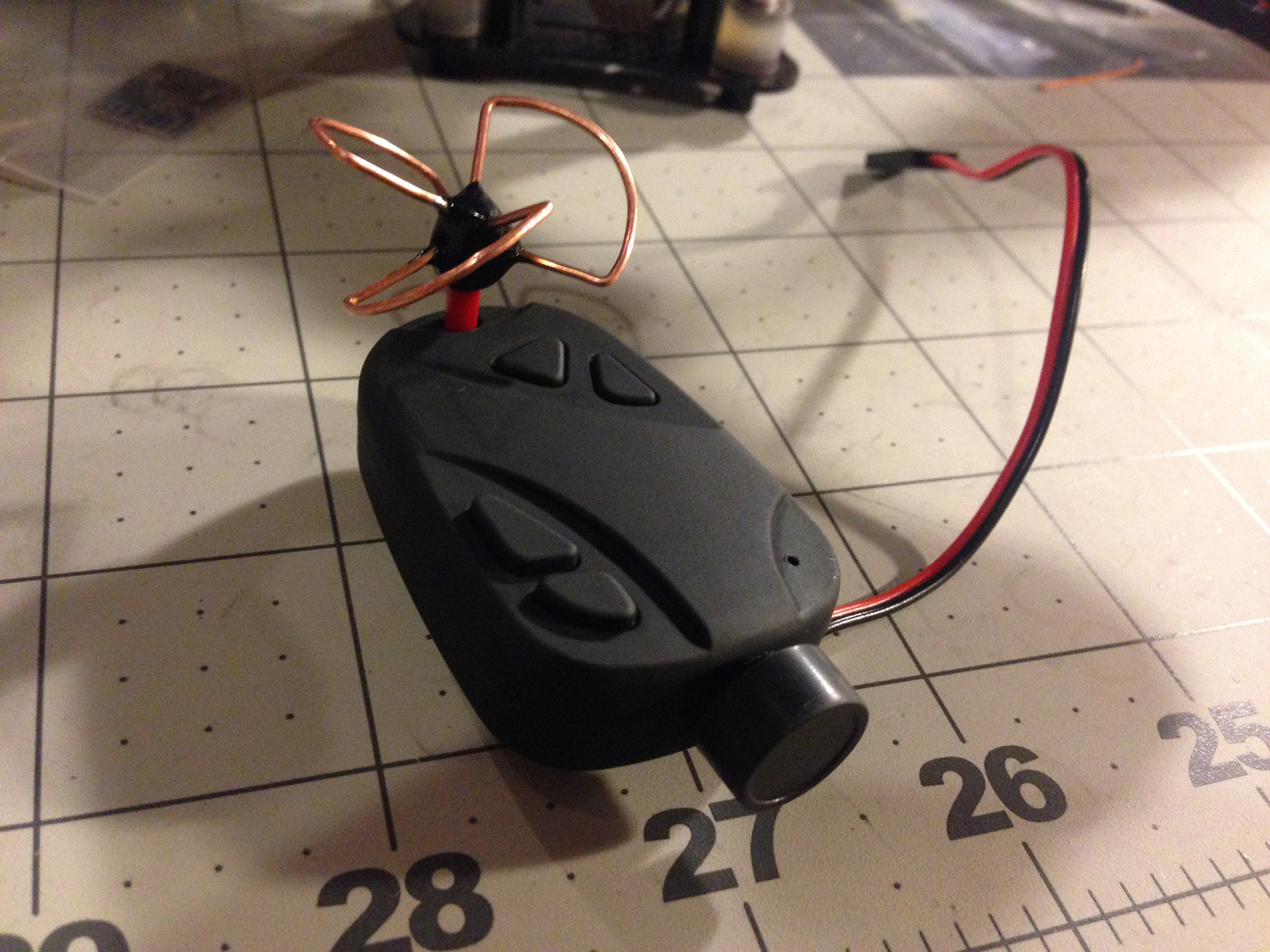 The camera can record in 720P and send out analog image to the video transmitter. In my tests I got a roughly 100 ms delay between the camera and the FPV screen. 100 ms isn’t bad, actually a little better than the GoPro. I measured 80-90 ms with the board camera I have, a Sony 600TLV, so it’s not really much worse than that. Overall, 100 ms is very flyable. You can usually get shorter delay with lower quality Sony TLV cameras, but you are sacrificing a lot of clarity for not that much increase in responsiveness.

Overall I love this design, though it turned out to be more fragile than I expected. My next quad, code name Orby will follow some of the design ideas of the Foldy 2.0, but take aerodynamics to the next level.

Orby will have tubular arms and spherical body. I am looking to design something similar to the Game of Drones frame but with emphasis on high speed drone racing. Keep tuned to see the progress!